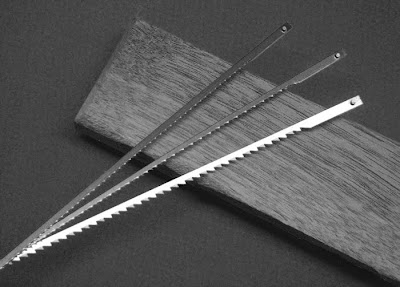 Last Sunday I was all set to cut out the scroll detail on the heritage door project so I went down into my shop, took out my bow saw and because I'm sawing a piece of 3/4" white oak needed to change out the fine tooth blade for my coarse one. The saw, made by Gramercy Tools in New York, came with an assortment of three 12" long blades: 10, 18, and 24tpi. I needed the 10 tpi for this application. So away I go into the 'ol tool cabinet to fetch it. Hmmmm, not in there; maybe the tool chest- nope. My other tool box? Notta. Then it hit me as if recalling a distant dream I suddenly remembered the last time I used my coarse blade, way back before the summer came,(so long ago)I was cutting out a sharp curve in some crazy hard maple and I snapped it! Well it quickly became obvious that I needed to order some new blades and did so on Monday. I figured it really wouldn't matter or set me back any time on the project because I still had lots of fine tuning and sanding to do on the door details. I'd move on to the next step and leave the scroll element for next week when the door is complete.
So that was Monday evening and I ordered the new saw blades, (got the three pack for $11.00...a sweet deal) so here I am going through some of the other door elements when today, Friday the door bell rings and it's a delivery man with the blades!
Man, that was fast. I've gotten so used to waiting weeks or sometimes months for something to arrive when I order it on-line.
Four days, that was all...that's good service. And the best thing? The courier just handed me the package! I also got pretty used to ordering something from the States and when it shows up on my doorstep I need to dish out some more coin for either the delivery, the customs charges, the delivery guys dying mother...what ever...my point to all this: Tools for Working Wood is a fast, reliable mail order company that has never let me down and stands by it's products. Always top notch service which sadly, is seriously lacking in most of my other dealings in this world.
So if you're an on-line shopper like me and would like to get some great service too, then Tools for Working Wood is somewhere you should try.
Cheers!

6 comments:
Email ThisBlogThis!Share to TwitterShare to FacebookShare to Pinterest 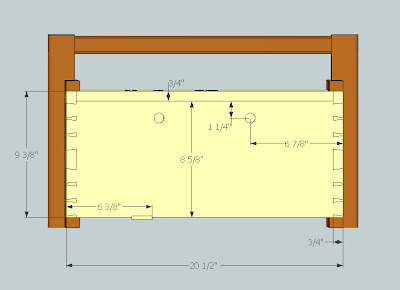 This past week a fellow East Coaster has been putting together some Sketch-Up models for the book projects. They'll all be available at my new website when the book is launched in November but I thought I'd show you some shots of the first project model here. It's the Cabinetsmakers Toolchest.
These are only 'stills' from the program but when you actually open the files in Sketch-up, you'll be able to zoom into the pieces, rotate them and flip them over, change your perspective on each 'scene' as well as 'orbiting' all around them to get a closer look. A really cool educational tool, they also have all of the dimensions and measurements for you. 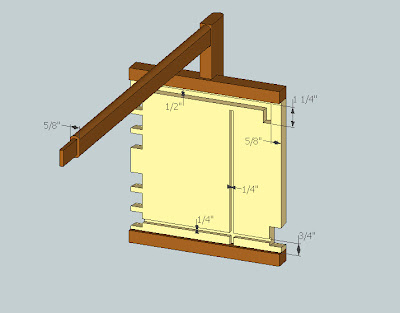 If you don't know Sketch-up it's a free application from Google. Click the link to download! You'll be able to look inside the pieces, see the joinery up close and really get personal with the designs. It should also answer any joinery questions when the time comes for you to build these pieces in your own wood shops.
A great tool, it seems that every time he sends me a new model I can't help to think: "Man, I wish I had this while I was building them!"
I'm really looking forward to November...

(and thanks again Daniel) 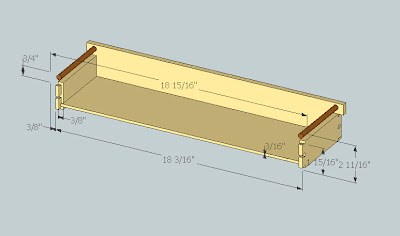 No comments:
Email ThisBlogThis!Share to TwitterShare to FacebookShare to Pinterest

Tools of the Trades 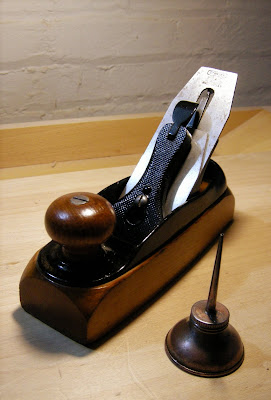 It's Sunday afternoon and I spent the morning out in Pickering, Ontario at the Tools of the Trades Show. It's a really nice gathering of vintage and antique tool dealers peddling their wares to wood geeks like me! I would have posted some info on the event sooner but I only found out about it myself this past week. Oh well, for those that missed it you can catch the Spring session in April.
I went there this morning with nothing in mind really, I don't actually have a short list of tools I currently 'need' or even 'want'(imagine that). Once there though I found many, many tools I would have loved to acquire but my wife would have shot me if I came home with a truck load of new-old tools!
Anyhow, I did make two small purchases- the first is a small little oil can; I wanted one of these for awhile now and this one fit the bill perfectly. I'll use it to keep my Jojoba oil in. Jojoba oil is a natural, non-toxic oil product I use on my tools to keep rust at bay. It's similar to the camellia oil you may find for sale at places like Lie Nielsen Toolworks. The main difference is it's a little heavier but easily found off-the-shelf at health food stores while camellia oil is a little more rare(at least it seems to be in Toronto). The little oil can is copper or brass I believe and will live nicely above my work bench. 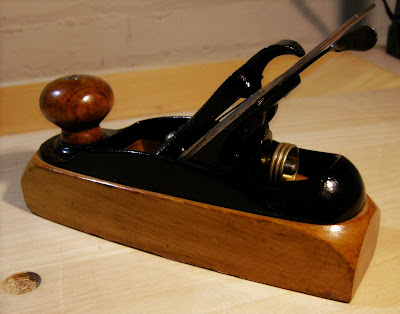 The second treasure I stumbled over is a beautiful example of a 1930's Stanley No.22 Transitional Smoother. If you're familiar with transitional planes you may have read reviews about the problems they seem to have with the rear totes moving and becoming loose while in use. One big plus about the No.22 is it doesn't have a rear tote, so......no problem! For anyone that isn't familiar with transitional planes they were wooden bodied planes that had a cast iron frame screwed into the body which was usually made from Beech. This perticular model has a kind of squat, mushroom shaped knob that's a little beafier than the taller, slimmer styles found on Stanley's metal planes. I like this 'robust' little front knob and find it fits my hand quite nicely.
Stanley claimed that "Every Carpenter needs two or more wood planes in his kit, for rough outside work" and the transitional plane was the answer for it. For a wooden bodied smoother, I really like the feel of this model and the fact that it doesn't have the rear tote adds to the comfort while in use. This model was also the first with a lateral adjuster. If you'd like some more information about transitional planes or any other Stanley hand planes for that matter, check out Patrick Leach's web site. It's an incredible resource of information. 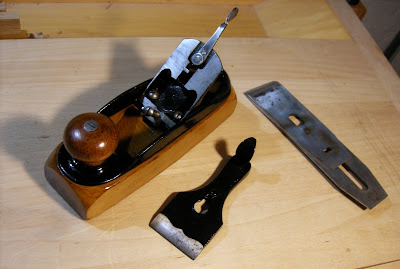 This one is in beautiful shape with the original chip breaker and iron, a near-perfect condition lever cap and very-very few marks on the sole. Having the original chip breaker and iron with the added bonus of the Sweetheart logo still clearly visible was a nice touch indeed but that said, I'll rip them out of it as soon as I can and replace them with new ones from Ron Hock! What can I say I'm a worker, not a collector!

So these were my finds, small treasures on a nice Sunday morning surrounded by vintage tools and friendly people. If you were there you know what I'm talking about, if you missed it then maybe you can make the next one in April.
Cheers!