That is the Pencil 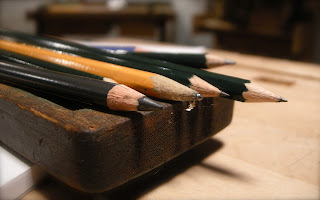 Remember you’re grade school teachers saying you’d get led poisoning if you didn’t keep your pencil out of your mouth?
Well, they lied.
In 1564 an enormous deposit of graphite was discovered in Borrowdale, England and pencils have been made from this non-toxic material ever since. Up until that point however, writing implements were indeed made of led and would carry a justified warning of ingestion but once graphite was discovered the scribbles became much more user friendly and I’d guess a bit  tastier as well.

Originally, thin sticks of graphite were wrapped in string to keep these brittle implements from constantly breaking. Not long after, hollowed wood was used and the pencil as we know it was born.
The first massed produced pencils came in 1662 from Nuremberg, Germany (go figure) and once the Industrial Revolution took hold, pencil manufacturers were coming out of the wood work.
In North America, early settlers depended on pencils being imported from over seas. That was until 1812 when William Monroe, a Concord, Massachusetts cabinet maker started making the first pencils in the new world!
A cabinet-maker eh? I’m not at all surprised. Why? And why really all this talk today of pencils?
Because this is where the creative process begins. With a pencil in your hand.
It isn’t at the work bench and it sure as hell isn’t in front of a computer. It’s the ghost of inspiration waiting inside an empty sheet of paper and these simple tools, graphite sticks wrapped up in cedar, carefully sharpened and eager to bridge the gap. From that first spark of inspiration out from your imagination and into a reality on the page in front of you. That’s a good place to begin. It isn’t always easy to get there but like sawing dovetails or sharpening plane irons practicing every day will help.
I’m at the beginning of my book and thought I’d share those fun facts about this invaluable tool we so often take for granted.
Do you have a pencil and a sketch book? You’d better get one.
Stay tuned…
No comments:
Email ThisBlogThis!Share to TwitterShare to FacebookShare to Pinterest
Newer Posts Older Posts Home
Subscribe to: Posts (Atom)