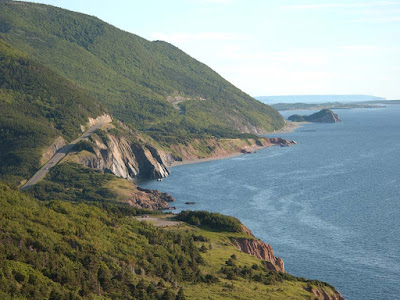 Well it's been a busy few weeks around here and I'm getting through the door build. I have all of the mortise and tenons cut with the panels and mouldings to go. My original plan was to finish the door over the next week or two and then head East to Cape Breton for a much needed summer vacation. My client has informed me that they're doing some major basement renovations on their home and won't really be needing the door for at least the next two months so he suggested I leave when ever I can and finish the door when I return at the end of August. So with that, I'm putting the build on hold and heading back home to Cape Breton this weekend.
The photo above is looking down from the highlands towards Cheticamp, a small Acadian village a short drive from our home. We actually do all of our grocery shopping here and some of the spalted Maple I used in one of my book projects came from this area.
It's been a great year, the 13 projects I made, six which make up my book that'll be launched in November. Made by Hand, Furniture Projects from the Unplugged Woodshop for those that didn't know already. I've actually been doing alot of re-shoots and re-writes trying to make it as good as I can throughout this past month. I'm really looking forward to getting it out there and getting some feedback on the projects. Each book will included a free DVD titled 'A Beginners Guide to Hand Tool Essentials'
The book, as I understand it will be available in hardcover through most online book stores such as Amazon and the like. If you're interested I'll be offering some pre-orders here in the late summer/early fall, these will all be signed copies and include the DVD as well as a bonus music CD I recorded awhile back. It will also have a bonus project section offered only to pre-order customers. It's basically an extra chapter with a new design that didn't make it into the original text of the book. I'll keep you posted on the details.
As for the next few weeks I won't be blogging as often, being in a rural setting doing all of those summer time things we do up here as Canadians; fishing and swimming, hiking and drinking beer... it'll be rough getting to a computer to write! (not from all of the beer but from the lack of a high speed internet connection out there)
So with that I wanted to say thanks for all of the support and comments everyone has been leaving over the course of the winter book project and now into the spring and summer seasons. The door project will be completed when I get back for those who were interested in following the process. I'll keep you posted on the summer time festivities and will hopefully be announcing some other cool news and projects for the fall.
It'll be a buzz getting back home to the old boat shop full of my power tools...after the 'hand tool only' year I've had I'll probably go all power-tool-crazy and start making lots of dust and noise! I know I have an angle grinder and brand new carving disk back home that's never been used...maybe some sculpted seats in a slab of heavy Maple...something for around the camp fire perhaps? I'm also looking forward to seeing my timber frame all stacked and waiting to be worked on some more. I have quite a pile of maple and beech that should be pretty dry. This will get rough milled while I'm out there and make the trip back here to the city for future projects come the fall.
Like I said I'll do my best to keep everyone up to date on my projects-so with that, have a great summer and happy shavings.
Cheers and thanks again!
Email ThisBlogThis!Share to TwitterShare to FacebookShare to Pinterest