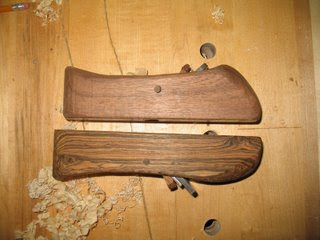 A while back I went to visit the shop of a good friend of mine and fellow wood-worker, Mike Morrison. In my hand I held one of my prized possessions, my James Krenov Smoothing plane. I had purchased it a year or two ago, the day after I read that Mr. Krenov was no longer making cabinets but selling his hand planes. You can search my Archive section for the full story. Sometime last year, I was telling my friend Mike the whole Krenov story and he too decided to order a hand plane from the cabinetmaking Guru. One of the main reasons for the visit on this particular day was to do a kind of comparison; see if they were any where near the same or completely different beasts all together. When I walked in to his shop and finally held the two planes together I was pretty shocked at the differences between the two. Visually, they're clearly Krenovian in appearance, his seemed at first somehow 'denser' or 'sturdier?' than mine; although I thought this may be due to the comfort thing I get from having used mine for a year. On this day we were like two kids on Christmas morning, I'll show you mine if you show me yours! I tried out his on some long grain hardwood he had on his bench top and although it felt like a finely tuned plane, comfortable and yet somehow foreign, it didn't feel like my Krenov. I realised I'd have to spend some more time on it but couldn't on this day due to another engagement I had. I left my Krenov in Mikes very capable hands, (obviously a very close friend, if you leave your James Krenov Smoothing plane in his trust)and he spend a few hours comparing the two planes. He's promised to post a Blog on the findings he had and will post them soon on his site, Morrison Woodworks. Find the link on the side bar. You can also find the James Krenov link where perhaps you too can acquire one of these finely crafted instruments.
Email ThisBlogThis!Share to TwitterShare to FacebookShare to Pinterest